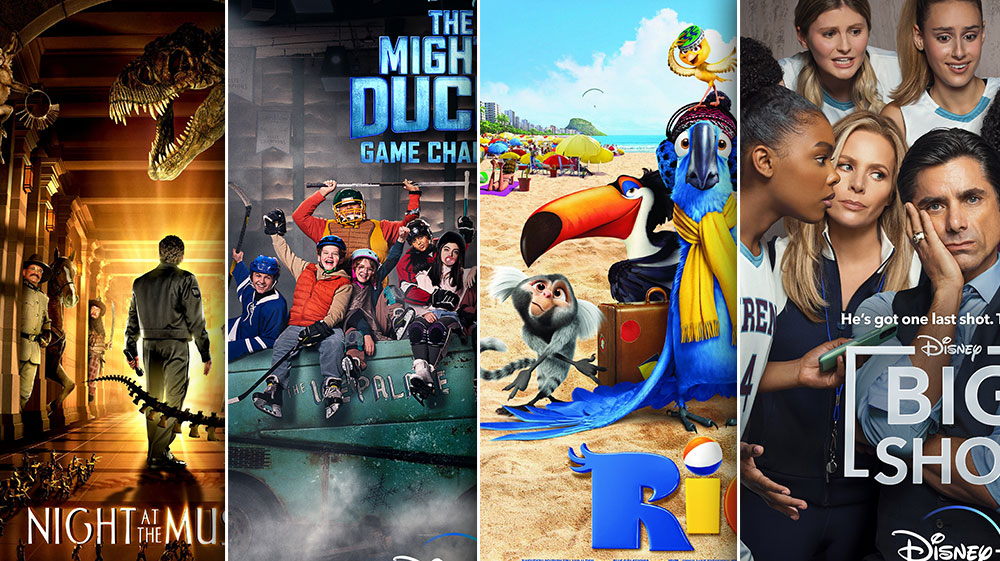 A new month means new streaming service releases, and April 2021 is full of them, so get ready to bring on the binging! Tons of classic movies and TV shows are headed to both Disney+ and Hulu, and we broke them all down.

Get ready to take a walk down memory lane with Dove Cameron because all four seasons of Liv and Maddie are headed to Disney+ in April. There’s also new episodes of the original series The Falcon and The Winter Soldier and The Mighty Ducks: Game Changers headed to the streaming service every Friday, all month long.

A spinoff of the original Disney film franchise, The Mighty Ducks: Game Changers is all about the story of a 12-year-old boy, named Evan, who gets cut from the Ducks, an “ultra-competitive, powerhouse youth hockey team,” according to Disney+’s official summary. The young hockey player and his mom enlist the help of Coach Bombay (from the original films) to help them create a new team. Although it’s set to premiere in March 2021, the show will have new episodes until the end of April. So, mark your calendars!

Another entertainment industry legend, John Stamos from Full House fame, is also headed to Disney+ with a new series called Big Shot. “After getting ousted from the NCAA, a men’s basketball coach is given a chance for redemption with a coaching position at an elite private high school,” the show’s description reads. He soon learns that the teenage players require empathy and vulnerability — foreign concepts for the stoic Coach Korn.”

Of course Disney+ is continuing to add new episodes of Secrets of Sulphur Springs as they air on TV so fans are able to catch up with the scary series. Both Night at the Museum movies, RIO and more will also premiere in April.

Over on Hulu, there’s a bunch more release, including season four of the fan-favorite series The Handmaid’s Tale. As for movies, Ramona and Beezus — starring Selena Gomez and Joey King — will be available for streaming and bring on all the nostalgia. There’s a lot more releases coming to launch subscribers right into the springtime, and you won’t want to miss out on any of them! Unfortunately, fans will also be forced to say goodbye to some of their favorite flicks and series as well.

Scroll through our gallery for a full list of everything coming to and leaving both Hulu and Disney+ in April 2021.