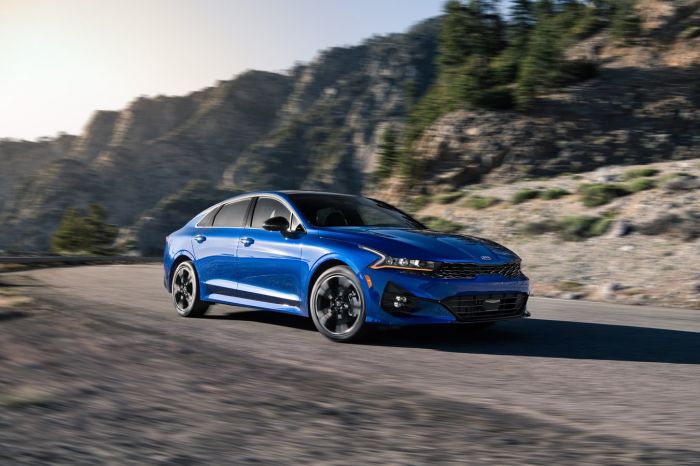 With the high-performance variant of the new K5 sedan, Kia takes aim at luxury sports sedan stalwarts like the BMW 3-series and the Audi A4. 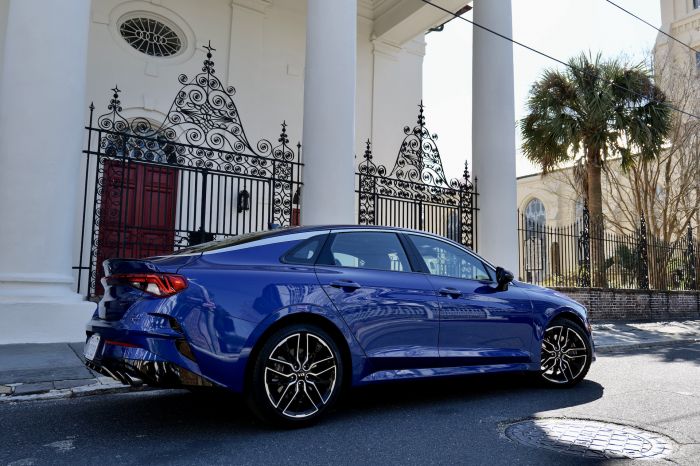 Kia has some of the world’s best automotive designers working in creative and leadership roles––including those with Audi, BMW, Lamborghini and Bentley pedigree––and you sense the talent of that deep bench when you first look at the silhouette of the K5.

There’s definitely a little Audi DNA in the shape of the K5’s tail, which resembles a smaller Audi A7. I was surprised when my neighbor, who owns a new loaded Audi A4, came over to swoon over the K5. And I was even more surprised when I took it to visit a relative who buys a new six-figure sports car every six months, and I found him alone out in his driveway, admiring it.

The K5 is a pretty car at any trim level, but the GT’s visual upgrades, which include 19-inch wheels with Pirelli tires, a more menacing GT front grille, a rear spoiler, and quad-tipped dual exhausts give the GT an aggressive character of its own before you even start the engine. 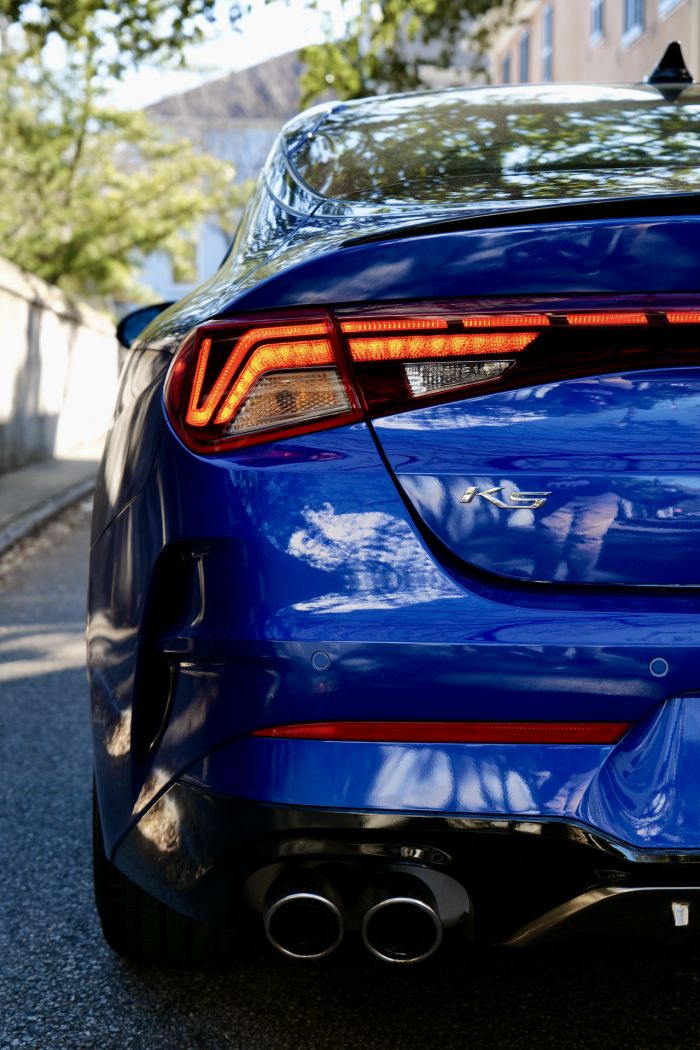 Kia oriented the cabin around the driver, angling the screen and buttons towards the driver’s seat the way you’d see in a sportscar. It certainly feels sportier to not sit at 90-degrees to your dashboard controls, but it also makes passengers feel a little on-the-outside-looking-in. For example, one small side effect of reorienting the cockpit towards the driver in the K5 is that there’s a little angled barrier on the passenger side of the center console that the passenger’s left knee pokes into. This is minor, but if you simply removed this aesthetic design detail, it would give the passenger––at least one on the taller side––a more comfortable ride. Form and function align well overall with the K5, so this little incongruity between the two stood out for me. 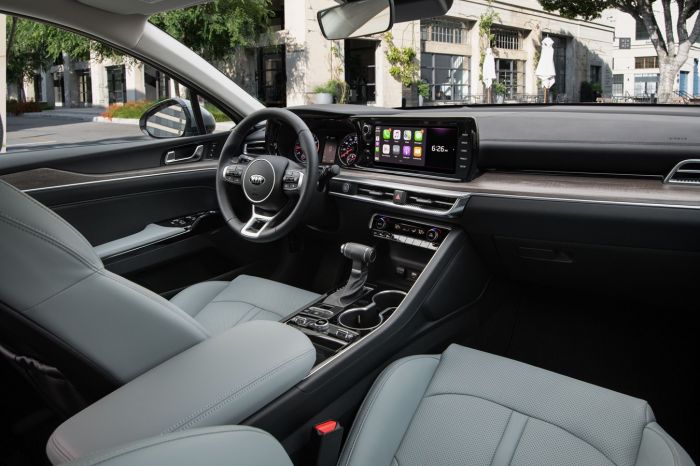 The designers have taken great care to ensure that the surfaces the driver touches have the feel of luxury; like the leather-wrapped flat-bottom steering wheel and leather-wrapped shifter, and the metal knobs and toggles for the climate control and the heated and ventilated seats. Looking down at the steering wheel, I couldn’t help but wish it bore Kia’s new badge. The new Kia logo will be a noticeable visual upgrade, whenever it makes its way into the production line.

Taken on a nine-hour round trip with a family of four loaded into it, the K5 felt spacious and comfortable inside. The panoramic sunroof is relatively massive, as is the trunk, which was so unexpectedly large it felt like they somehow managed to hide a Lincoln Town Car’s trunk in the back. 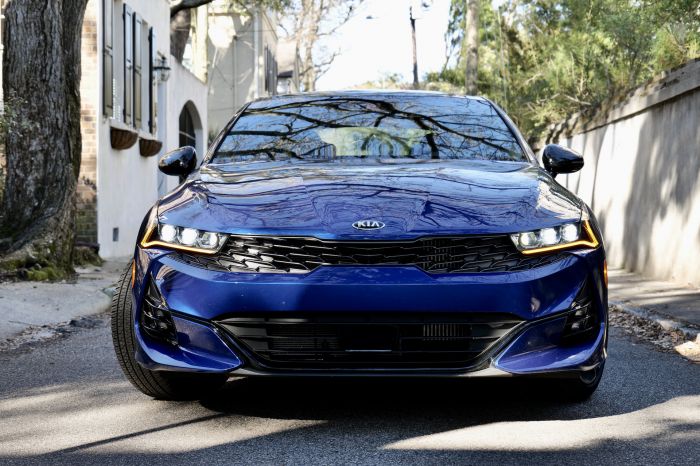 Kia states that the GT is 0.28 seconds faster from zero to sixty than the 2020 BMW 330i, with a faster quarter-mile top speed, and also better corner handling than the BMW. This is an impressive comparison, though in a real-world scenario I doubt anyone would drive both cars side-by-side and come away feeling like the K5 has any decisive performance edge over a 3-series. But the fact that KIA set up this head-to-head road test makes it clear what audience they’re going after with the GT. And the fact that the K5 did so well leaves no doubt that Kia is gaining ground on legacy luxury-performance brands.

Start it up, and the 290-horsepower inline four-cylinder engine has a low, throaty growl that I didn’t expect. Almost Italian in its intonation. And with the 311 lb-ft of torque, take the K5 on an interstate and you’ll find yourself threading through traffic with remarkable agility––made even better by the Pirelli tires. In city driving, you notice the moment you pull away from a stoplight that the K5 gives its torque early, at 1650 RPMs. But in Sport+ mode, where traction control is disabled, the wheelspin can also start at a much lower speed than you’re expecting. I usually kept the K5 in regular Sport for city driving as a result. (Not that I didn’t enjoy the wheelspin.)

Gas mileage is stellar in the K5. I like to drive press fleet vehicles for adrenaline more than gas mileage, but I still found it hard to put a dent in the GT’s 15.8-gallon tank. Over nearly five-hundred-miles of freeway driving, the K5 GT didn’t ask for much, and gave anything I asked of it. 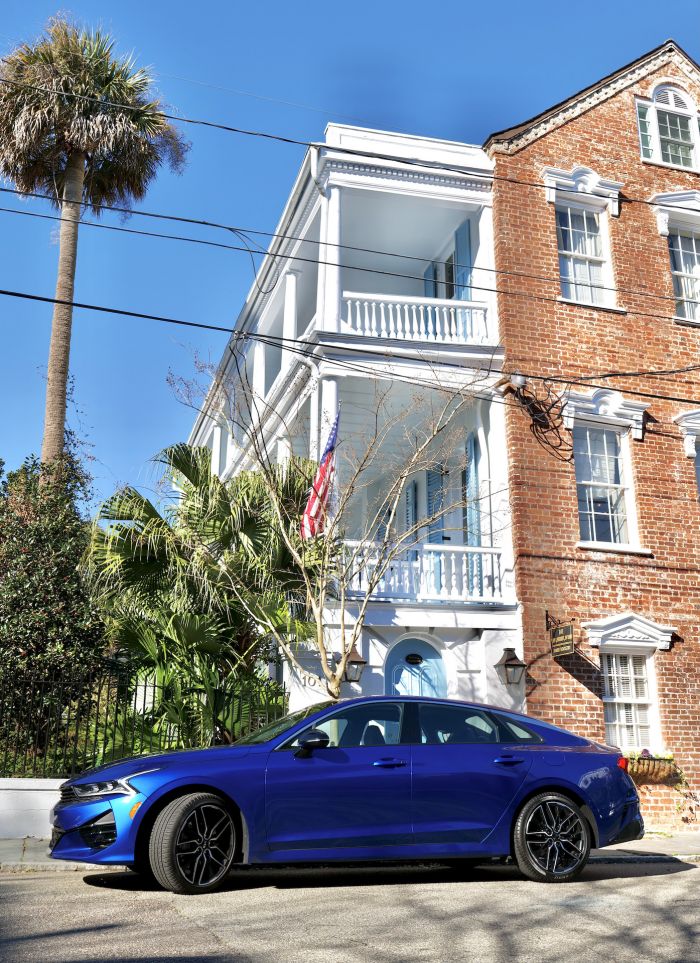 With a base price of nearly $11,000 less than the base 3-series BMW, and around $8500 less than the base Audi A4, the K5 GT delivers on its promise of high performance at a practical price. But I’d venture that the success of the K5 may hinge on the question of whether buying a sports sedan is, in itself, a practical purchase or a status purchase.

While I don’t necessarily think that the K5 GT will lure loyal 3-series or A4 lovers away from BMW and Audi, I do think that it will lure new and younger buyers who came of age in this era of microbrands, and who care more about features and value than brand loyalty. These are the same people who’d buy boots from a Kickstarter brand they’d never heard of for the tannery that made the leather. Or buy a watch off of Etsy for the automatic movement inside, instead of for the name of the dial. So, for an automaker with a reputation for over-delivering on substance and undercutting on price, Kia’s K5 GT is one more reason––like the Telluride, Sorento, and Stinger before it––why time is on their side. 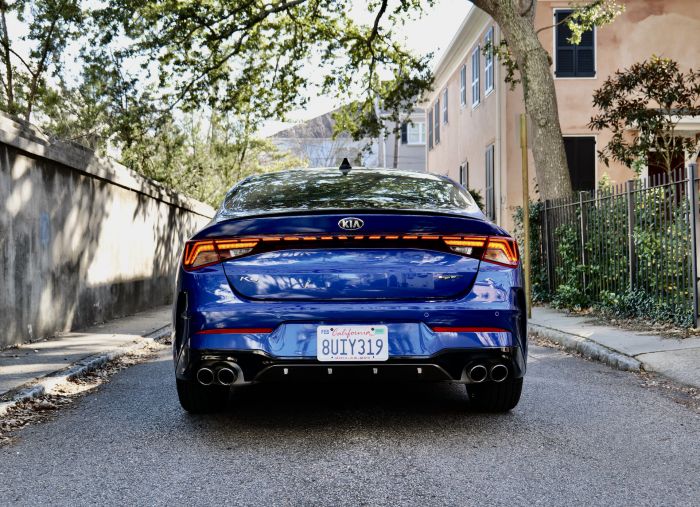