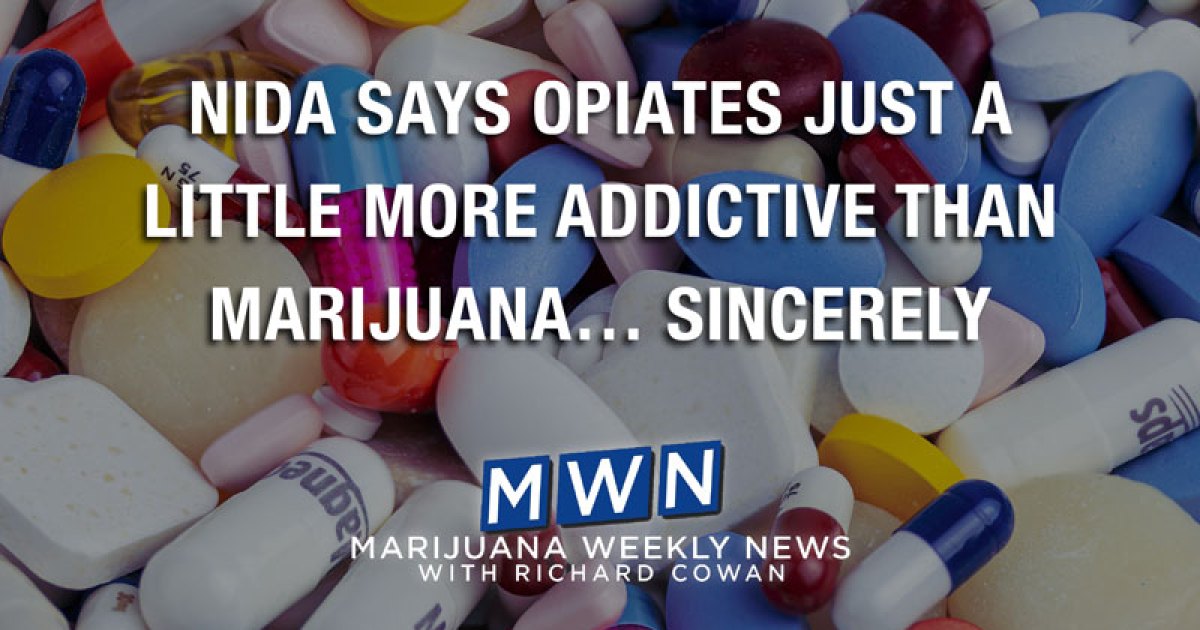 Did the National Institute on Drug Abuse really say that opiates are just a little more addictive than marijuana? Well, here is the headline from an article on Bloomberg.com: “Cannabis Almost as Addictive as Opioids Among Teens, Study Finds”

Remember when the Prohibitionist used to warn about “sending the wrong message?”

Consider: “Excessive alcohol use is responsible for more than 95,000 deaths in the United States each year, or 261 deaths per day. These deaths shorten the lives of those who die by an average of almost 29 years, for a total of 2.8 million years of potential life lost.”

See Deaths from Excessive Alcohol Use in the U.S. And Cigarette smoking is responsible for more than 480,000 deaths per year in the United States, including more than 41,000 deaths resulting from secondhand smoke exposure. This is about one in five deaths annually, or 1,300 deaths every day.

My objective is to point out how the Federal government is continuing to pour out prohibitionist propaganda and the journalistic failure to call it out. As an excellent article in Wikipedia explains, addiction is a complex problem.

However, it should be obvious that not all “addictions” are created equal. For example, tobacco is very hard to quit, but no one actually dies from nicotine withdrawal. On the other hand, withdrawal from alcohol, benzodiazepines, and barbiturates – and sometimes opiates- can be fatal. These drugs (and alcohol) also have relatively low ratios between lethal and effective doses. Marijuana has no effective lethal dose nor is sudden cessation life-threatening.

Moreover, is being “addicted” to something with no lethal dose equivalent to something that kills tens of thousands of Americans every year?

Nonetheless, the article begins by saying, “Teenagers’ addiction rates for cannabis are about the same as for prescription opioids, according to a new study of drugs and youth.”

The basis for this claim: “A year after first trying cannabis, almost 10.7% of adolescents age 12 to 17 met the criteria of addiction. Those in the same age group who tried prescription opioids had a similar addiction rate of 11.2%, according to the study, published Monday in JAMA Pediatrics.”

And then, the immediate politicization:

“The findings contradict widely-held perceptions that cannabis isn’t particularly addictive and may attract attention amid a broad U.S. push to liberalize its use.”

And then the reveal: “The rates of addiction were significant, especially since teenagers’ brains are still developing, according to Nora Volkow, an author of the study and the current director of the U.S.’s National Institute on Drug Abuse.”

NIDA is the federal bureaucracy in charge of subordinating science to the Drug War. Volkow has been the Director of NIDA since 2003. It is not particularly relevant, but Volkow is the great-granddaughter of Russian communist revolutionary Leon Trotsky, so think of how disillusioning that must be for the last of the old Trotskyite Yippies of yore.

See The myths of smoking pot by Ruth Marcus in the supposedly “Progressive” Washington Post. The Vatican newspaper could not be more reverential toward the Pope.

And then real journalism The case for marijuana legalization just got stronger by Christopher Ingraham.

As I always point out, we anti-prohibitionists want you to see for yourself what the prohibitionists are saying, but they never link back to us. Freedom has nothing to fear from the truth.

For adolescents who experiment with cannabis, the risk is real: “One in 10 teens having a marijuana addiction — that’s huge,” Volkow said in a phone interview. Using cannabis also gives them a higher chance of becoming addicted to other drugs later, she said.

If users were younger when they first tried cannabis and other drugs, they were more likely to become addicted, the study found. For those in the 18-to-25 age range, only 6.4% developed an addiction a year after first trying cannabis — about half the rate of the younger age group. In the older 18-25 category, opioid addiction rates were similar to marijuana addiction rates after one year, according to the study. Cocaine addiction rates were slightly lower.

The findings underscore how important it is for doctors to ask teenage patients about recreational drug use, something that isn’t always emphasized at younger ages, the researchers said.

Emily Einstein, one of the study’s authors, said a rise in cannabis’ potency in recent years could help to explain the higher addiction rates. She cited separate studies that have found marijuana with higher levels of THC to be more addictive.

The study is based on data from 2015 to 2018 collected by national surveys done by an agency of the U.S. Department of Health and Human Services.

Recreational cannabis is spreading rapidly at the state level and federal lawmakers are debating bills to legalize it nationwide. While states that allow cannabis restrict its use to those age 21 and over, some studies have found that more widespread availability in legalized states is linked to more use by young people.”

There have been more than 22 million arrests for marijuana possession in America alone with many millions more around the world, and even last year arrests were still near 500,000, (more than for all the violent crimes combined) and researching medical uses of cannabinoids has been blocked for decades, but the propaganda plays on. Marijuana Prohibition has much to fear from the truth.

Richard Cowan is a former NORML National Director and author of Points You Must Know Before Buying CBD Flowers.