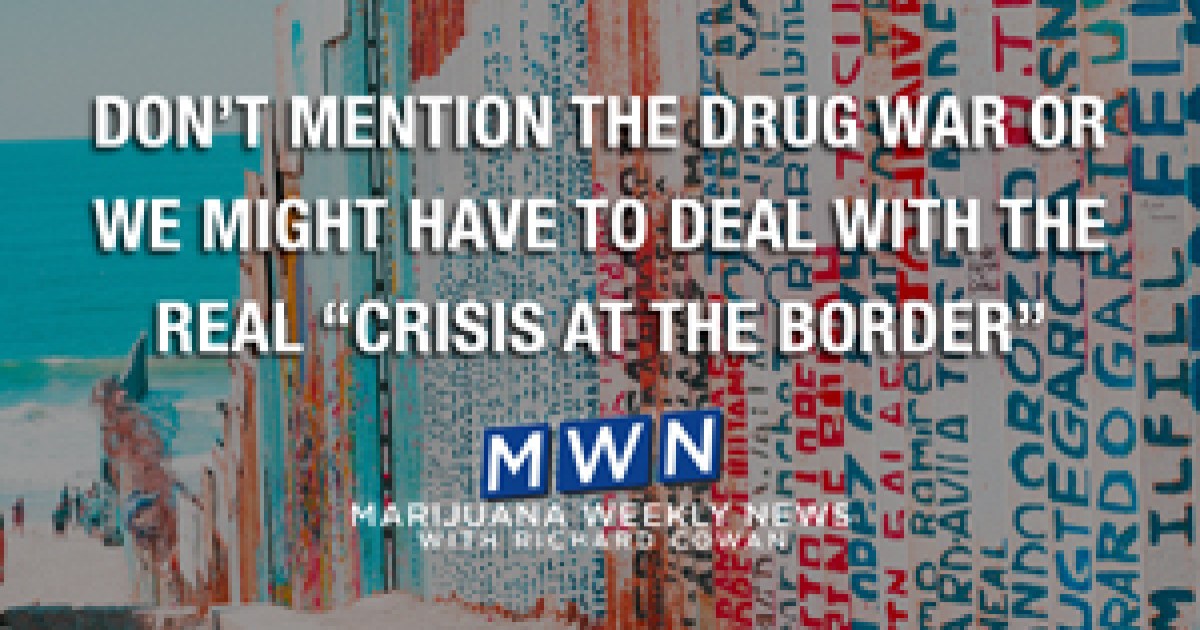 You may have heard THERE’S A CRISIS AT THE BORDER!!! OMG! OMG!!

Well, yes there is, but it didn’t start with Biden, and he is not going to be able to stop it.

During Trump’s first Presidential campaign he claimed that he was going to save America by building a “big beautiful wall” and that Mexico would pay for. He knew that that was a lie, but that meant he could continue to talk about it as an “issue.” After he was elected, the Republicans controlled both Houses of Congress, but he did not push for Federal funding for it. It was too useful as an issue.

And it still is, and he is still lying about it, but so is the Biden Administration, because- to paraphrase one of Jack Nicholson’s great lines, neither of them can handle the truth.

The real crisis at the Border began decades ago and thousands of miles to the south. It began with Nixon’s war on marijuana and escalated with every Administration since. Supported by Biden every step on the way.

See THE UNTOLD STORY: JOE BIDEN PUSHED RONALD REAGAN TO RAMP UP INCARCERATION — NOT THE OTHER WAY AROUND

When the US escalated the war on Mexican marijuana, using the herbicide Paraquat, and heavy enforcement at the border, marijuana production shifted to Colombia.

See Paraquat Pot: The True Story Of How The US Government Tried To Kill Weed Smokers With A Toxic Chemical In The 1980s

Guess what else Colombia produces: Cocaine! So guess what happen next. In order to get cannabis from Colombia, big American marijuana dealers had to buy cocaine. Enter Pablo Escobar.

Then the Mexican gangs (No they are not real “Cartels”) saw the opportunities in using their knowledge of the US border and their connections to US “marketers”, to become the middleman and get most of the profits from cocaine. Enter crack.

Then in 1996, the US decided to escalate the war on methamphetamine bypassing the “Comprehensive Methamphetamine Control Act of 1996.”

It made it harder to buy pseudo ephedrine at the local drug store, so guess what happened? Meth production moved to Mexico, and the gangs there got another market, and Americans got stronger meth!

In the meantime, the big Mexican gangs have vastly more cash than the little countries in Central America, which are conveniently located between their Colombian cocaine suppliers and their American markets.

Of course, the US has its own export market.

See Mexico’s defense chief says smugglers sneak guns from the US into Mexico in washing machines, gas tanks, and boxes of chocolate and A Drug War With No End: How It Will Ultimately End Our Freedom

But guns are good, and drugs are bad. Mkay.

Guess what happens next! The real Economics 101: Lead or gold.

The dysfunctional Central American governments cannot provide even the most basic services for their impoverished children. So, after two major hurricanes and the COVID-19 pandemic, parents are sending their children trekking across Mexico to the US alone. Do you think these parents don’t love their children? And how desperate they must be!

Here in the most powerful country in the world, these children terrify Congressional Republicans, unlike the lovely, ever so peaceful protestors on January 6.

But now let’s assume for a moment that in 2017 the Republican Congress had paid for Trump’s beautiful wall. Would there not be a “crisis” at our border?

Back in the 1950s after the Communists took over China, there was a debate over “Who lost China? “ Let’s not have one about who lost Mexico and Central America!

See US drops case against ex-Mexican general after pressure

And to my Evangelical friends, look at the children and let us not forget that the real “crisis” at the border is one of the Spirit. Trump may blame Biden, who will God blame. (Assuming you don’t think Trump is God.)

See DOES A FOOTBALL STAR HAVE TO GET KILLED FOR AMERICANS TO SEE HOW DANGEROUS THE DRUG WAR REALLY IS?