First, a power update: The generator and transfer switch bypass plan has been solidified, the town permit has arrived, and the work will commence soon. I’m pretty sure what I’ve learned through this debacle will help other audiophiles improve both their power and their system’s sound.

Now, on to this month’s column: Revisiting an updated product from a small company can be a rewarding experience. For startups in our competitive, niche marketplace, just remaining in business is a challenge. Many under-capitalized startups founded by well-meaning idealists/hobbyists disappear in just a few years if not faster.

Stereophile‘s willingness to review a product depends to some degree on a company’s track record and staying power, for good reason: We don’t want readers to get stuck with expensive products they can’t get serviced or supported. There’s more leeway in a column, however; it’s assumed that if you’re experienced enough to be a columnist you can exercise good judgment and take more risks. That can be good or bad for a company: A good review can give a new company a leg up, but a bad one can sometimes kill it.

DSA founder Douglas Hurlburt concerns himself more with engineering acumen than with acronym gimmickry, bejeweled or gilded chassis, or memorable product names. DSA’s products are available factory-direct through “à la carte productions,” the company’s sole sales outlet. The Phono III costs $19,000 and comes with a 30-day money-back offer; if you don’t like it, return it. If you choose to keep it, the purchase includes a 3-year full warranty: Buyer pays shipping, DSA pays return shipping. The company has been around now for 17 years, so it’s a pretty safe bet you won’t be left stranded in “out-of-business land” during the warranty period or beyond.

Hurlburt’s background shares elements with those of many of us, building and modifying Dynaco and Heath kits while in high school. From there though, his path diverges from mine, and from most. In 1962, he got his undergraduate degree in math and physics from Johns Hopkins University, following that in 1964 with an M.Sc. (Master of Science) in solid state physics from McGill University, and in 1972 a Ph.D. from McGill in electrical engineering.

After that, I promise you, he did not go to work for a hi-fi company! He got involved in research, first for RCA in Canada and later at MIT’s Lincoln Lab in Lexington, Massachusetts. He also worked at DARPA (the Defense Advanced Research Projects Agency) as a program manager and later as a Defense Department private contractor/consultant. He retired in 2010. There’s far more to his résumé, but that’s sufficient to make the point that he’s a smart, well-educated guy, slumming in retirement in high-performance audio.

Much of his work is classified, so I can’t further elucidate. Let’s just say there’s a reason America manufactures among the best measuring, and best sounding, weaponry in the world.

There’s something affirmational for a vinyl record enthusiast like me to know that a scientist retiring from a career focused on the analysis, design, and development of ultrawideband, spread-spectrum communications systems and airborne radar systems would pivot to creating not a DAC but a phono preamplifier.

The Full-Featured, No-Nonsense Dsa Phono III
The Phono III features two pairs of DC-coupled differential gain stages using tightly matched JFETs, two of which can be adjusted to provide the gain required by any cartridge. Each gain stage employs a precision, temperature-compensated, low-noise, constant-current source and a low-noise voltage regulator, which combine to produce the “ultimate in stability, signal control, and isolation.”

The output is class-A balanced differential, push-pull. The circuit employs no loop feedback for either gain or EQ. EQ curves include, in addition to standard RIAA, pre-RIAA curves for Columbia and Decca/ffrr, including for 78s. (That’s five curves altogether.) Each gain stage employs internal feedback designed to keep distortion low. The circuit applies the selected equalization via passive, low-pass networks.

Hurlburt says this approach produces low distortion and very high dynamic range while simultaneously eliminating transient intermodulation distortion, which DSA says is common in circuits where interstage loop feedback is used for both gain and equalization. From input to output, the Phono III has no coupling capacitors in the audio chain, which are said to degrade the sound, yet DSA claims that the design is stable and resistant to DC drift.

Manufacturers tout the advantages of their products’ designs, but few mention the negatives. Hurlburt does. Locating the high-frequency equalization filters between the first two differentially coupled gain stages requires the filters to be precisely matched. DSA balances and calibrates the filters after manufacturing and during factory “break in,” after which, he says, no further adjustment is required.

The Phono III utilizes separate, high–bias-current, class-A output drivers for each polarity that are fully regulated and powered separately from the amplifier’s voltage rails. The output stages are capable of providing in excess of 20 peak-peak drive volts without clipping and up to 30mA of distortion-free current. DSA says this gives the Phono III the ability to drive amplifiers with input impedances as low as 1k ohm or long cable runs with capacitance greater than 30nF (at 20kHz; the Phono III can drive significantly higher capacitance values at lower frequencies).

In addition, Hurlburt says, this circuit design provides easy polarity inversion and true monophonic capabilities, both of which are selectable via a front-panel–mounted pushbutton. Polarity inversion is also available using the black-anodized aluminum, chrome-capped remote control, which allows you to “A/B” from your listening position.

The design pays particular attention to eliminating noise, which of course is critical to amplifying low-voltage signals while maintaining the widest possible dynamic range. The Phono III features a pair of matched, shielded, toroidal transformers, the primaries of which are driven out of phase to one another and which are encased in a magnetically shielded housing designed to “virtually eliminate” residual AC fields within the chassis; the chassis itself is also designed as a Faraday cage connected directly to AC ground.

There’s a great deal more in the manual about noise suppression, but I’m afraid I’ll run out of space if I don’t stop now.

The “lab grade” instruction manual provided all of this information, as expected from such a credentialed scientist. That information-packed manual can, consequently, seem diffuse and difficult to follow, but that’s a small price to pay. You come away from reading the manual with a great deal of useful knowledge beyond how to operate the preamp. I’m just glad there’s no postreview graded exam! Setup and use
DSA supplies four patent-pending “Critical Mass” isolation feet and titanium threaded adapters that screw into the chassis underside. The rear panel has three pairs of inputs with a choice of single-ended RCA and balanced XLR inputs and one set of outputs via single-ended and balanced connectors. Each input has a banana plug–type ground lug, and there’s an additional chassis ground lug, useful for turntable grounding.

The front panel is a model of well-organized clarity and utility. On the left are three buttons for selecting the input; below that are six more for selecting gain: 40dB, 46dB, 50dB, 56dB, 60dB, and 66dB. Four buttons on the right let you choose stereo or mono, invert absolute phase, and turn the Phono III’s rumble filter on or off. The fourth button—for “channel differencing”—is the most interesting, making it easy to adjust azimuth. Just put on a mono recording and toggle the button as you adjust the azimuth until you get the lowest volume possible from both channels. The Phono III’s manual argues that this approach is satisfactory in most instances, while a superior approach is beyond the capabilities or resources of many audiophiles. Fair enough. Three more buttons on the front panel’s extreme right side select “Standby,” “Run,” and in between them, “Mute.” (“Run” is the preamp’s On button.) In the middle, on the brushed aluminum center panel’s top section, a large LED display shows the current resistive or capacitive loading; below this are three blue LEDs labeled “EQ Group,” indicating RIAA (center) or on either side, either of two presets, EQ1 or EQ2. Three vertically arrayed LEDs to the right of the resistive/capacitive loading display indicate “Ohms,” “100k,” and “pF.” More about that coming up.

Swing the invisibly hinged door to the left (a major aesthetic and ergonomic upgrade from the Phono II’s vertically oriented door), and you’ll find the switches that set the loading, gain, and equalization choice for each of the three inputs, via 12 well-organized toggle switches and a pair of large, blue up/down “load adjustment” buttons. Starting on the left, the first toggle switch in each group sets either MM capacitive loading (up) or MC resistive loading (down). 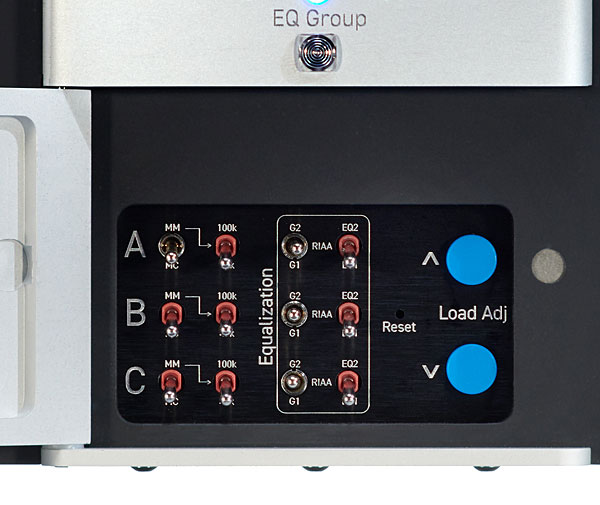 The second toggle switch applies only to MM mode and selects either 100k ohms or 47k ohms for the resistive loading. The 100k ohm loading option is really useful, because 47k ohm is at best a compromise setting; often, 100k ohms is the correct MM load. There’s not enough space to go into this here in more detail.